Skip Blumberg, producer, filmmaker, camera journalist, artist, and video pioneer, has made hundreds of productions over his 50-year career… on the web with 3,000,000+ views, including on www.SkipBlumberg.com and MoreArtistsMovies; in permanent collections of the Museum of Modern Art and other U.S. and European museums; on Showtime, PBS, Disney Channel, National Geographic TV, and TV channels internationally. Blumberg is recipient of three Emmys, Ohio State University Journalism Award, Guggenheim Fellowship, Winter Olympics Artist-in-residence, and many other honors. Skip has produced numerous award-winning educational and fundraising films for non-profits, websites, start-ups and other clients. He conducted hundreds of production workshops, university and school classes, and in-person screenings, including as U.S. Department of State Cultural Envoy, and as Artistic Director of MyHero.com’s Global Exchange in 5 countries and on the web. He is Videofreex Partnership Administrator, Curator/Admin for www.JaneAaron.com and President/Founder of Friends of City Hall Park (NYC).

Nancy Cain co-directed Media Bus, a nonprofit post-production facility, when it transplanted from Lanesville to Woodstock, NY in 1978. She also served as program director of Woodstock’s community access TV station. In 1984 she began working in Hollywood directing several early reality television programs, and field directing for The Wilton North Report, a late night program on Fox TV. Cain was co-creator and producer of the PBS series The ‘90s and was the creator/producer of CamNet: The Camcorder Network, a 24-hour programming service on United Artists Cable Systems. Her videos have been shown at The Museum of Modern Art, Whitney Museum of American Art, Muse d’Arte Moderne de la Ville de Paris, and other venues. She is the author of Video Days: And What We Saw Through the Viewfinder. Cain is a prolific photographer of  California desert life.

David Cort had an independent production company producing, among others, a series of short dance videos that were included in the award-winning film “Four Journeys into Mystic Time” directed  by Shirley Clarke. He served as production designer for the Christa  McAuliffe Planetarium in Concord, NH where he also performed as  Albert Einstein. Later he designed battlefield communications systems for the U.S. Air Force. He was  a recipient of the American Film Institute Independent Filmmaker Grant, and taught at the Massachusetts Institute of Technology; University of California, Los Angeles; and California State University, Dominguez Hills. 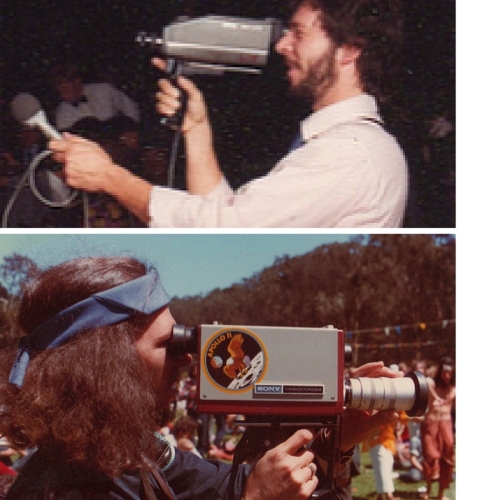 Bart Friedman’s videos have been exhibited at the Everson Museum of Art, The Jewish Museum, the Museum of Modern Art, the Woodstock Film Festival, and other venues. After Lanesville, he co-directed a not-for-profit media arts center and post-production  facility in Woodstock, NY, continuing as Media Bus, Inc. He is currently a partner in Reelizations Media, a company that produces and distributes videos related to behavioral health and addiction recovery. He is an independent video producer in regional arts and community affairs, and serves as a board member of Saugerties Public Access Television  and Willow Mixed Media. 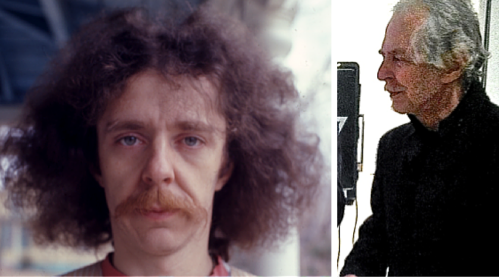 Davidson Gigliotti left Maple Tree Farm in 1975, joining forces with Elaine Summers and the Experimental Intermedia Foundation, where he produced performance art and dance tapes, working with Trisha Brown, Min Tanaka, Elaine Summers, Laurie Anderson, Charlemagne Palestine, Jean Dupuy, Pauline Oliveros, Nam June Paik, and others. Beginning in 1977 he wrote the video art column in the SoHo Weekly News. His work was exhibited in the1981 Whitney Biennial and twice in The Museum of Modern Art’s Projects series. In 1987 he moved, with Summers, to Sarasota, FL, where he wrote on art and other subjects for the Sarasota Arts Review, the Bradenton Herald, and Sarasota Magazine. He directed the Sarasota Visual Art Center between 1996 and 1998. He moved back to New York City in 2001 and is currently President of the Emily Harvey Foundation, which offers artist residencies in Venice, Italy. He is also editor of websites RadicalSoftware.org and the Early Video Project, and writes about video.

Chuck Kennedy left Maple Tree Farm in 1978 to live 45 miles away in New Paltz, NY. Chuck married and had a daughter. For several years, he worked in freelance electronics repair and studio maintenance, both in the Mid-Hudson and in New York City, before taking a full-time position at Lifetime Television in New York. He returned to work in New Paltz when a job became available at the Center for Student Media at the State University of New York. There, he supported the campus television and radio stations. Chuck died of heart failure in March 2004, just shy of his 60th birthday. His daughter Rhea Kennedy now represents him in the Videofreex Partnership and is webmaster of http://www.Videofreex.com.

Mary Curtis Ratcliff left the collective shortly after they moved to Lanesville. By 1973 she had migrated to the San Francisco Bay Area. In California, Ratcliff’s wind sculptures and ceremonial pieces were used in the early women’s spirituality movement. Since 1999, Ratcliff has concentrated increasingly on two-dimensional work, integrating photography, drawing, painting, and image transfer techniques in multi-layered, intricate explorations of nature, pattern, and perception. The prolific artist’s work has been exhibited in over 30 solo shows and 130 group shows. Her artwork is in 80 private collections and the permanent collections of the Fine Arts Museums of San Francisco and the Oakland Museum of California. She lives and works in Berkeley, CA and is a member of Oakland’s Mercury 20 Gallery and SFMOMA Artists Gallery.

Parry Teasdale served as an advisor to a Federal Communications Commission task force that resulted in the adoption of Low Power Television (LPTV) service in the United States. Thereafter he co-founded The Television Center, an LPTV consulting firm. In 1985 he began writing for and then became managing editor of the weekly Woodstock Times. He is currently owner, editor, and publisher of The Columbia Paper in New York’s Hudson Valley.and columbiapaper.com, which ironically has the CBS News Link on the home page. He is the author of Videofreex: America’s First Pirate TV Station and the Catskills Collective That Turned It On.

Carol Vontobel worked as an educator and as a caseworker for the developmentally disabled. She is currently employed  as a licensed social worker having earned a master’s degree  from the State University of New York at Albany. Her video A Portapak Conversation (1973), produced collaboratively during Videofreex, was screened as part of the Women’s  Video Festival in Buffalo, New York City, and San Francisco.

Ann Woodward continued her work in television after Lanesville. She reunited with Russell Connor, whom she had assisted on Vision & Television (1970) at the Rose Art Museum, as a producer for Cable Arts Foundation, which encouraged cultural programming in emerging cable television outlets. Later she achieved a distinguished  career as a video editor, most notably on The Barbara Walters Special for which she earned two Primetime Emmy Nominations. During this period she continued to paint and illustrate. In 1990 she left television and returned to school to pursue nursing. She worked on the AIDS Unit at New York City’s St. Vincent’s Hospital for over a decade. She currently devotes all of her time to her visual art practice. Woodward’s mixed media paintings are held in private collections throughout the United States and Europe.