Videofreex members travel across the country and around the world to introduce screenings of their work, lead workshops, and present on panels. When the prodigal member returns, he or she emails a candid report to the group.

Videofreex.com will feature these event reports from time to time, complete with a unique Videofreex style, winks to fellow members, , and mentions of mutual friends and collaborators. Find all past event reports in the Events page. 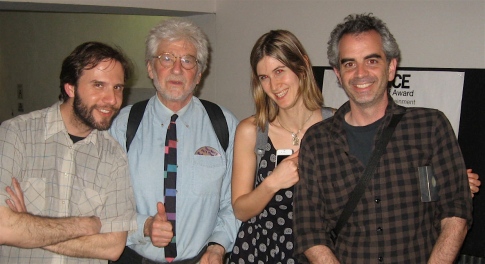 Audience of about 60 in theater holding 180 or so felt substantial enuf although spread out.

I advised ones in front to move back where Jon and I sat, due to early video incessantly moving handheld camerawork. No one moved.

Projection was huge. I laughed when after “Chiefs” the curtain WIDENED for our video. I remembered playing sections of the footage in Paris in 1972 in the courtyard of the Institut des Beaux Artes with David to 250 French art students on a small CRT TV.

Picture and sound quality from the Beta and in the theater were excellent, but audio sync was off. Curiously I timed it sometimes at 4 seconds delay, others at 1:12, and sometimes it slipped into sync albeit with very low level.  Quality control did not catch until a half hour or more into the screening. Then switched to DVD which was a little darker, but sync sound took out the disorienting video art quality, and made viewing the material even more real.

I HAD NEVER SEEN THIS TAPE BEFORE. (Nor was I in DC for production).

Honestly it should be edited down to 20 minutes or half hour from its 59:45.

The drama and fear develop well as more and more cops, national guard and then demonstrators are observed by the camera, first inside driving car  as it enters DC for an endless amount of time (like most of reel 1 – there were 3 20-minute reels) with news radio on, then thank goodness out of the car to record the most amazing street footage (that I had seen many times before in show reel excerpts) of police and army over-reaction, including David getting clubbed in the shins by a cop (there’s a photo of this!), then lens pushed by a plain clothes thug.

Curtis’ footage at the end is a pastoral epilogue that reveals DC on screen, along with Richard Hoffman (!!!!!!) and Pablo Lights’ Bob Quinn.  But similarly this can be cut way down while being true to its spirit and make it even more dramatically effective.

The excellent material is proven by its continued success in current distribution. It has a tactile immediacy that puts viewers on the front lines. Its artlessness has integrity. It would not take much to edit for contemporary audiences with a renewed distribution launch.

But it’s not just excessive, redundant and extraneous material that made it humiliating for me to sit through it with an audience. It is the horrific dirty lens and the long (and I mean 15 minutes) section of intermittent silence due to bad mic cable. Ugh.

About 10 or so people walked out during our movie and some came back in (see Maire’s note). Half stayed for q & a.

There was a guy who had been in DC, arrested on the Capitol steps, who asked the audience to hold up hands if they had been born before 1971 and fewer than 10 held up hands. There was a guy with an accent dressed in black who took DSLR video throughout and made a couple of comments. There was a very smart and soft-spoken Greek media activist who added international, contemporary context.  One young woman challenged the role of our kind of media in covering the movement (then and now), but it seemed petty and I hope I addressed it directly by advising to look at the big picture. Another guy brought up whether we were criticized for being observational media and again I hope I addressed it directly by saying we got lots of criticism from all sides and didn’t care about criticsm. Davidson also had good things to say, and helped limit my academic bluster and political rantings.

I am glad to hear from Maire that there were positive audience reviews.

It was certainly a good shakedown for us and SVA’s Allison who stayed for the whole thing (although I dint have a chance to intro her to Ron). Ron btw indicated he’d like to do something at Paley Center during the SVA event! (He is also communicating with AR about a possible TVTV 40-year anniversary event!)

Again thanks to Maire (pronounced “Mary”) and OWS committee, VDB and Anthology for kicking off the year of “Here Come the Videofreex!”

Jon gave me a copy of the Mayday Collective’s edit, which he sez is excellent. A future screening?

And remember: general strike May 1!