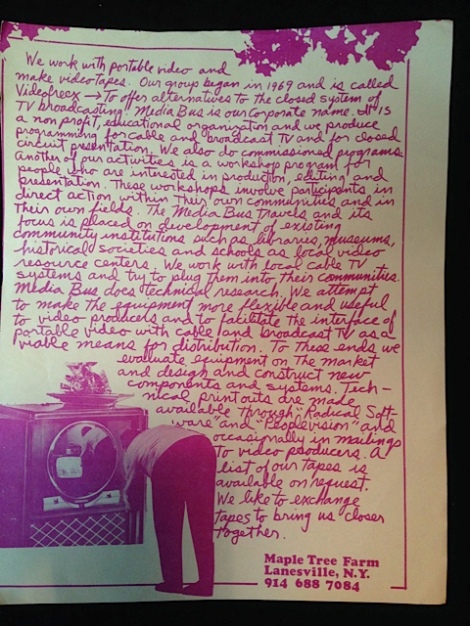 We held our first meeting at SUNY New Paltz on April 24, 2014 to present exhibition themes to campus and off-campus partners, and to introduce ideas for related public programs and participatory activities. Engagement opportunities are essential for the success of Videofreex: The Art of Guerilla Television. Perhaps the most important contribution that Freex made during the 70s was their commitment to education and training. With missionary zeal, the Freex put technology in the hands of regular folks through “Media Bus” mobile workshops. Their contribution to Vision and Television (1970) at Brandeis University, the first ever museum exhibition devoted to video art, was entitled “Freex Out!”. The Freex led and documented workshops at the University’s Rose Art Museum and recorded discussions with other artists on view.

When Daniel conceived this exhibition, he wisely suggested we dedicate space in the galleries for students and community to livestream, broadcast, produce, and exhibit Freex-inspired work. Greg, Jim, and Bill are eager to involve students enrolled in communications and art courses during the Spring 2015 semester. Galen, whose organization Wave Farm had its origins in pirate broadcasting 25 years after Lanesville TV, suggested specific guest artists and media makers to interact with Videofreex footage and produce new content using the exhibition’s studio as a base. Nicole recommended we involve Drop TV, a production and broadcasting workshop organized by Children’s Media Project in Poughkeepsie.

Nicole is also interested in using the Rosendale Theatre Collective, a volunteer-run art house theater, as a base for a screening series of Freex tapes. This might include thematic programs on feminism, Black power, and other areas explored in Freex material expertly preserved by Video Data Bank.

Other events may include a sneak preview or work-in-progress presentation of the documentary Here Come the Videofreex! by filmmaking duo Jon Nealon and Jenny Raskin, as well as discussion-demos with Catskills video pioneers and today’s socially engaged media makers who share the DIY ethos of early media makers. 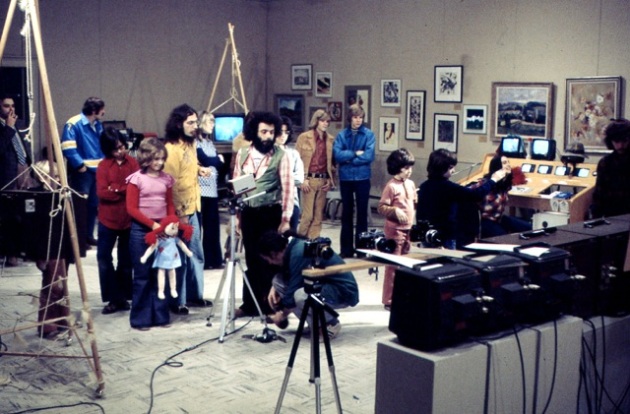 David Cort and visitors to Video Games (1973), an exhibition at the Kirkland Art Center in Clinton, NY; Courtesy Videofreex

Another idea that Freex member Skip Blumberg proposed is to bring XFER STN to the Catskills. XFER STN was originally presented at the New Museum the summer of 2013 as a service to migrate obsolete media produced by artists on obsolete formats. Trained archivists work with artists to digitize materials, provide them with copies, and make the works accessible online via the Internet Archive. It’s only fitting to attempt to bring XFER STN to New Paltz because early video was born and bred in Upstate New York.

SUNY’s budget is modest and only covers a limited number of public programs, so we’re relying on partner organizations to expand interpretation and engagement efforts. In fact, New York State Council on the Arts cannot fund SUNY directly because the university already receives money from the state.

Nonetheless, the exhibition will acknowledge the visionaries at NYSCA, a grant making organization that provided substantial support for experimental television art and video back in the day. In fact, groups like Raindance, People’s Video Theater, Global Village, and Videofreex may not have lasted as long as they did without NYSCA. Grants may not be as large as they once were, but NYSCA still provides critical support to artists and arts administrators. In fact, I’m certain I would not have this opportunity to curate this exhibition without my experiences over a decade ago as a NYSCA panelist and as a participant in the Council’s convenings that foster a collegial network of media arts professionals.