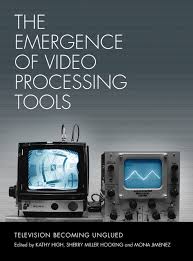 A screen shot by Ann Woodward who assisted David Cort at WNET’s TV Lab and performed in a resulting video produced at Electronic Arts Intermix.

Congratulations to Kathy High, Sherry Miller Hocking, and Mona Jimenez on the recent publication of The Emergence of Video Processing Tools: Television Becoming Unglued (Intellect Ltd., 2014), which provides a new angle on the history of art and technology. This two-volume study features stories about equipment and systems designed by artists and techies during the late 60s and 70s. Congratulations also go to the Videofreex, who are featured in the book, recognizing their pioneering experimentation with video special effects. In volume 2 of the series, engineer Dave Jones recalls how media makers hacked their cameras to flip or reverse video images. This involved switching the coils that wrapped around the pickup tube: “The Videofreex did a fairly well-known video back then when they used two images: one was normal and one was reversed. They were doing a kind of mirroring effect. David Cort did it a number of times in some videos” (p. 370). Videofreex member Skip Blumberg confirmed that the aforementioned video is Oriental Magic Show which was broadcast on Lanesville TV several times and on a special airing in conjunction with the Thirteen/WNET series Video Television Review (VTR). Produced by WNET’s TV Lab, VTR offered the Videofreex a larger viewership in the New York City metropolitan area. You can view Oriental Magic Show here starting at 34:50. Keep watching to hear a Lanesville caller complain to Nancy Cain about Skip’s obscene-looking armpit. In 1974, David Cort (a co-founder of the Videofreex) continued to experiment with processing tools at TV Lab’s Artist-in-Residence program where he developed the initial concept of the Video Art Transposer with assistance from Videofreex members. Described by David as an “electronic magic mirror”, this interactive tool allowed viewers to insert their faces and bodies into pre-set images of art historical or fictional characters. The participant passes his or her hands over a black surface and creates silhouette shapes that reveal and conceal the respective images. David’s intention for the Video Art Transposer was to connect individuals more deeply with art, history, and narrative through cognitive and physical processes. Below is a page from an illustrated grant proposal I discovered in Bart Friedman’s basement to create a version using books from the New York Public Library.

In 1975 the Metropolitan Museum of Art commissioned a video based on the Video Art Transposer using objects from its collections. Once again, the Videofreex prove to be ahead of their time: in this instance, interactive design in a museum setting. Compare David’s Video Art Transposer to the Gallery One Sculpture Lens at the Cleveland Museum of Art, created by Local Projects. We are still relentlessly pursuing technology as a means to engage with the visual arts, both with our bodies and minds. And hopefully we won’t forget to wear underarm deodorant along this journey.