Here Come the Videofreex has arrived! 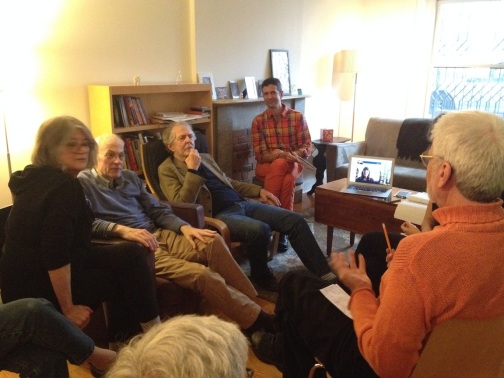 Videofreex (from left) Carol, Parry, and Davidson, along with Videofreex exhibit curator Andrew Ingall, chat with Skip at a milestone event. Ann is there, too, and Bart is behind the camera.

Before I explain exactly what I mean, I want to go back four years. Attending a screening of Videofreex work at the Light Industry in Brooklyn, I met a guy named Jon Nealon who said he was interested in making a documentary about the group. I was impressed and flattered on behalf of my late dad and the rest of the crew, but wasn’t sure exactly how this film and funding would materialize.

After an energetic Kickstarter campaign, hours of interviews, scores of tapes restored, and months of editing, it’s safe to say he meant it.

That intention (and all the hard work) became even more clear on October 11. That’s when Jon, along with filmmaking partner and wife Jenny Raskin, invited the members and curator Andrew Ingall to see a rough cut of the documentary-in-progress. All of the Videofreex in the New York area (Skip Blumberg, Bart Friedman, Ann Woodward, Parry Teasdale, Carol Vontobel, Davidson Gigliotti) gathered for this milestone event. Nancy Cain and Mary Curtis Ratcliff arranged to share their impressions from the West Coast. David Cort was there on screen and in spirit.

Filmmakers Jon Nealon and Jenny Raskin (left and center) discuss the rough cut of Here Come the Videofreex with Skip.

Though I didn’t have a chance to see it, the reports are very positive and I can’t help feeling a surge of excitement. Here comes Here Come!

What I DID get to do was brunch with the Videofreex members at Brooklyn’s Thistle Hill Tavern.

The Videofreex share a brunch table. Photo by Rhea Kennedy.

Videofreex: The Next Generation likes the spotlight. Photo by Bart Friedman.